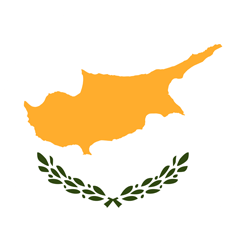 Becoming a Resident of Cyprus by Investment

Welcome to Cyprus, a country that has been ranked the 5th best relocation destination in the world by an international lifestyle review (report prepared by Knight Frank, a leading independent, global real estate consultancy firm). Cyprus offers all the ingredients one would look for when choosing a country as a new home. It is strategically located and it offers high quality of life, full EU membership, excellent weather, security and safety for the whole family, excellent private schools, well-educated workforce and business friendly environment. Equally attractive is the Cyprus tax environment. The huge wave of international tax developments including the introduction of Russian controlled foreign companies’ regulations (CFC) as well as the adoption by many countries of the Common Reporting Standard for the Automatic Exchange of Information and the implementation of Base Erosion Profit Shifting (BEPS), make an individual’s tax residence status a matter of high importance..

Cyprus Permanent Residency Vs. Other Programmes

A. Invested at least €300,000 in one of the following investment categories:

Investment in a house/flat

Under this category the purchase of a house/flat must be made by a developer company and it must concern a first sale unless the resale took place before 7/5/2013. The amount of EUR300, 000 excludes VAT.

Investment in real estate (other than house/flat)

Under this category the investment must take place in the share capital of a Cyprus company with proven physical substance and activities in Cyprus and which employs at least five (5) persons.

Under this category the investor must invest in units of a Cyprus Investment Organization of Collective Investments (AIF, AIFLNP, RAIF).

B. Secured annual income of at least €30.000, increased by €5.000 for every dependent person (spouse and children)
and by €8.000 for every dependent parent or parent-in-law. In case you choose to invest in a house/flat (first category) this
income should derive from abroad from sources other than employment in Cyprus (i.e. dividends, rent, fixed deposits,
pension, salary etc.). In case you choose to invest in any of the other three investment categories your total secured annual
income may also arise from sources that derive from activities within the Republic of Cyprus.

C. A certificate of clean criminal record from your country of residence or from Cyprus in case you reside on the island.

D. Signed a confirmation that you do not intend to undertake any employment in Cyprus. However, in case you choose to
invest in the share capital of a Cyprus company you may hold the position of the Director in such company while if the
investment is made in one of the other categories you and your spouse may hold shares in Cyprus companies and also hold
the position of a Director in such companies without receiving a salary.

It is noted that if you choose to invest in categories 2-4 above, you should also need to prove that you have a place to live in Cyprus which can be proven by a rental agreement, title deed or sale contract. 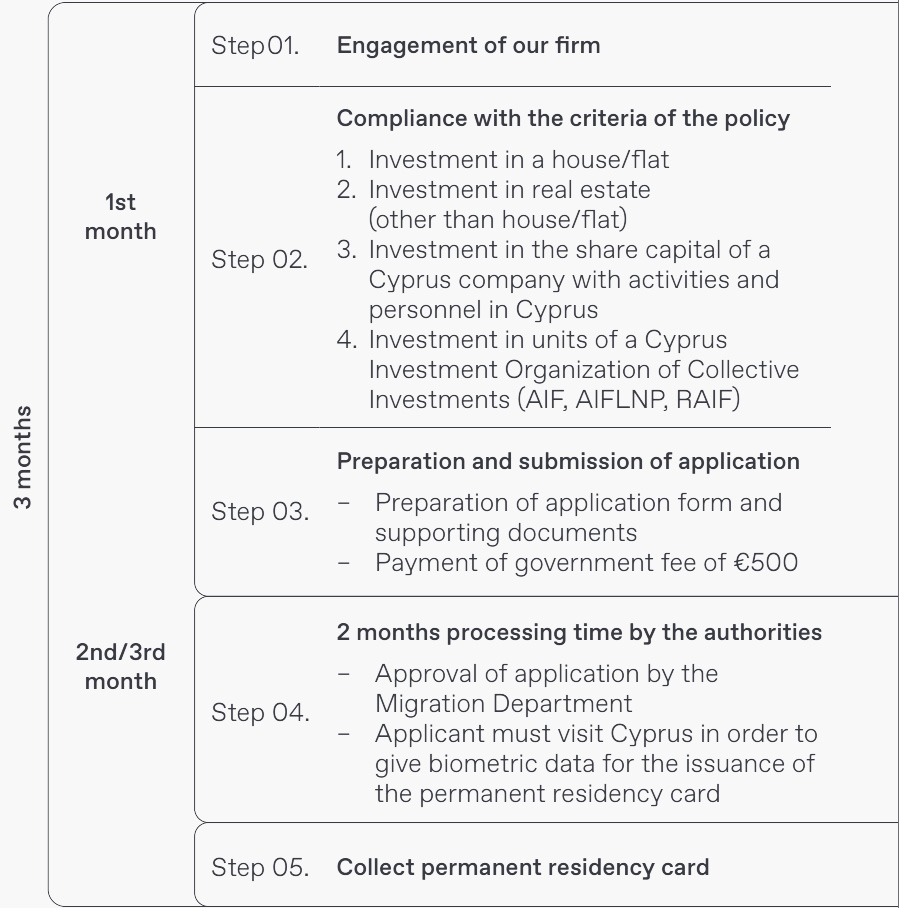 The above procedure and timeline diagram is indicative only. Vardikos & Vardikos is not responsible for any changes to the estimations; exact time and cost estimates will be provided individually.

An individual is tax resident of Cyprus if he/she is present in Cyprus for more than 183 days in a tax year or if he satisfies
cumulatively the following criteria:

He /she would be under normal circumstances subject to tax on worldwide income under both the income tax law and the special defence contribution (SDC). Under SDC the individual is taxed on dividends (17%) passive interest (30%) and rental income (3%).

However with the introduction of the non-domicile regime, with effect from 16 July 2015, a Cyprus tax resident individual with non-domicile status will not be subject to SDC on dividend, passive interest and rental income wherever arising.

Who can qualify for the non-domicile status:

A person has, at any given time either:

Based on the above, a person who was not born in Cyprus and was not a Cyprus tax resident 17 out of the last 20 years, will be considered as non-domiciled in Cyprus and can take advantage of the provisions of the non-domicile regime.

Other tax advantages for all tax residents:

How can we assist? 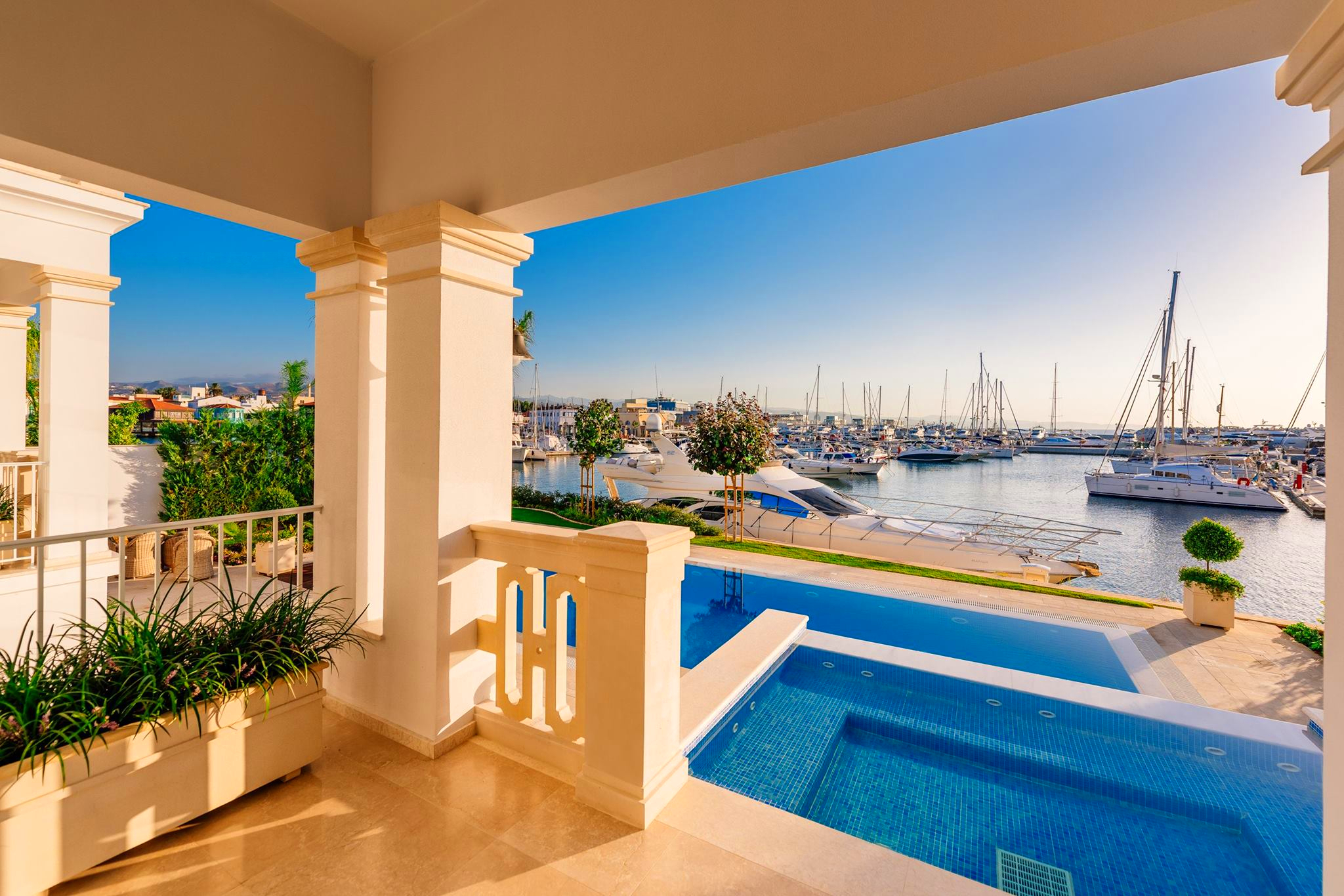 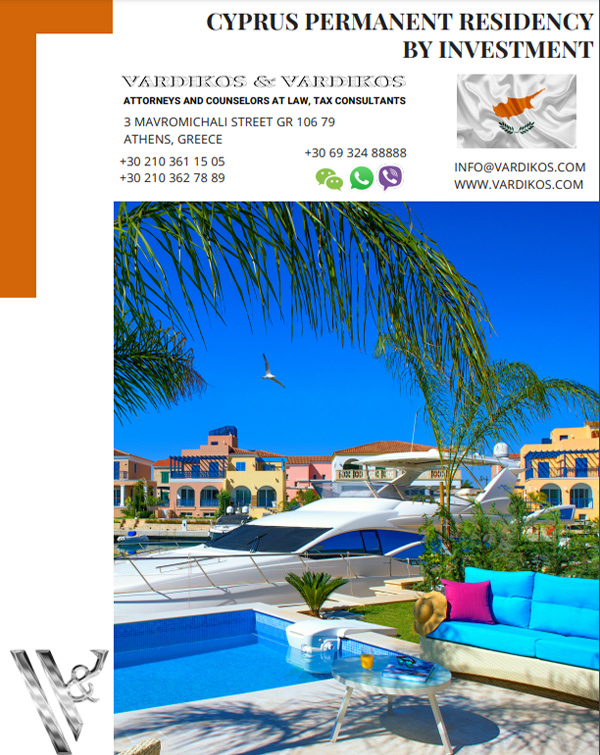 For any further information or clarifications please do not hesitate to contact us at: [email protected]
Alternatively, and for any other inquiries, please call us direct via +306932488888.